The earliest settlers in these Hudson Highlands were Indians of the Algonquin tribe, sometime known as the Delaware or the Leni Lenape. The earliest European settlers, the Dutch, named the area "Buttermilk Falls," after the dashing brook that tumbled down into the Hudson River. Henry Hudson is said to have explored the Hudson River in the early 1600's, in his ship, the Half Moon.

The history of the American Revolution pre-dates the actual settlement of our town, which presently consists of Ft. Montgomery (pop.1418), Highlands Falls, (pop. 3678), and West Point (pop. 7131). Many of the names in the area come from the Revolutionary War period. Small redoubts and several forts were begun during this time along the Hudson River Valley, as General George Washington and other military experts of the time knew that the river needed to be fortified against British ships. Enormous chains were also forged from iron from our local mines (now closed) which were then stretched with huge logs as floats, across the Hudson River in two places. During the Battle of Ft. Montgomery in 1777, the British marched around the forts when they attacked. They captured both Ft. Clinton and Ft. Montgomery, which were only partially constructed and not yet completely manned. They later destroyed both forts and dismantled the chain. The second chain, which was larger, was placed up closer to West Point over a year later, but was never tested by an invasion. The remnants of Ft. Putnam, high on a hill in the center of West Point, still remain today, and have been refurbished for historic and tourism purposes. Pieces of the chains can be seen at various places in the Hudson Valley, such as Bear Mountain Inn, and West Point's Trophy Point.

The first land grants here were established as early as 1723. The United States Government purchased privately owned land for its military post in 1790. This was only a portion of what is today known as West Point, which now covers over 16,000 acres of land. It began as a military defense post during the Revolution, but toward the end of that century, Congress saw the need for a school for the training of artillerists and engineers. In 1802, they decided upon the location of West Point as that school, and in 1812, they established it firmly with rules and requirements for entry, making it part of the regular Army. Among the most famous of the graduates are Robert E. Lee, Ulysses S. Grant, Stonewall Jackson, John J. Pershing , Douglas MacArthur, Dwight D. Eisenhower, and George S. Patton, Jr.

The Town of Highlands was originally part of the town of Cornwall. The first local meeting here was in 1873. At that time, the two towns agreed to become separate bodies. The Village was known as Buttermilk Falls until the late 1800's and was incorporated officially as Highland Falls in 1906. At one time, large and small boats brought tourist and commuters up the river to local docks. One can only fondly remember the days of the Dayliner, as it docked at Bear Mountain and West Point, full of summer visitors.

Mr. John Pierpont Morgan began to visit Highland Falls in 1858, and by 1871, he had purchased a home here known as Cragston. He and his family lived here during the summer months, and with hired help, he farmed and raised dairy cattle. He was vestryman and regular communicant at the local Church of the Holy Innocents. His wife, Frances Tracy Morgan, maintained a library for local residents. She and a local minister combined their collections, and in 1896, this library was chartered as a Village Library by the state of New York. Other famous people who lived and worked in the area include Molly Corbin, heroin of the American Revolution, known as "Molly Pitcher." She resided in Ft. Montgomery for a short time and is buried in the West Point Cemetery. The Hon. John Bigelow, writer and journalist, became Minister to France during the Civil War. His home was known as The Squirrels, and he entertained many famous people there. Two well-known naturalists, John Burroughs and Alexander Mearns, resided in our village for a time. Edgar Allen Poe was a cadet at the Military Academy, Although he did not graduate. Robert W. Weir was a famous artist who taught at West Point, and he was responsible for the design and construction of the Church of the Holy Innocents.

The original Benny Haven's Tavern was a house down by the river. It was run by a local businessman, and had the reputation for luring the young cadets away from their work. Supposedly, Edgar Allen Poe spent time there. It had its own song and legends, and there is a local pub named for this "historic" establishment today.

Ladycliff College was a women's four-year liberal arts college, established in 1933 by the Roman Catholic Church. It became co-ed in the 1970's and was closed by the church in 1980. It was built on the site of the famous old Cozzen's Hotel, which served guests until the turn of the century. Many of the guests had been affiliated with West Point, New York, Washington, or beyond. There are newspaper accounts of Abraham Lincoln visiting General Winfield Scott there in 1862. In the late 1800's the church opened a private school for many children there, and it eventually evolved into a college. At the present time, this old campus serves as West Point's South Post, which includes it's Visitor's Center, and the West Point Museum, which has an intensive display of military history.

A beautiful gem on the Hudson is Constitution Island, a small island accessible during the summer months by boat from the West Point dock. It was the home of Susan and Anna Warner, writers, teachers, and gardeners. Their home still stands amid well kept gardens and lawns. It is also a historic site, having been partially prepared as a fort during the Revolutionary War. Susan and Anna Warner were responsible for much popular "literature" written in the 1800's and their works are still being studied. Both ladies taught Bible classes to the cadets, who rowed over to the island in boats. Anna wrote the song, "Jesus Loves Me," which has become one of the best-known Sunday School hymns in America. Reservations must be made through the Constitution Island office in order to visit there. They also have a web site.

Another interesting island in the middle of the Hudson is Bannerman's Island. It was owned by the Bannerman family, and young Frank Bannerman made his livelihood by buying munitions and weapons, and re-selling them, in many cases, to revolutionaries in other countries. His store was known to be the largest private arsenal in the world. Besides storing his "livelihood" on this island, he built a Scottish-style castle for a summer home. He covered the island with towers, battlements, and the like. However, at this time, the island inaccessible. After being purchased by the state in 1967, it burned down in 1968 and only the ruins are left to be seen. Lately their is a Bannerman's Island Association group working for the benefit of the island restoration.

To the south of our town lies Bear Mountain State Park. Together with Harriman State Park, there are almost 54,000 acres of land set aside for hiking, camping, and other recreational activities. There is a large inn with hotel rooms and dining areas. Close to the river there is a small zoo and the Trailside Museum, with concentrations on local history and geology as well as animals. There are bears at the Bear Mountain Zoo! In the hills close by are the remains of an old town known as Doodletown. At one time, this hilly and secluded community housed many families who worked in the area. It dated back to before the Revolution. The state purchased it with the intent of development, but that never happened. However, the buildings were torn down, and only cemeteries remain today. Another portion of the State park system is Iona Island, over 100 acres of land in the Hudson River, just below the Bear Mountain Bridge. It was occupied by the British troops during the Revolution, at one time in the 1800's it was privately owned and used for orchards, and during the two world wars, served as a munitions storage depot. Today it is one of the largest bird sanctuaries in the nation, home to the bald eagle, among others.

The Bear Mountain Bridge spans the Hudson at one of the narrowest points. It was built in 1924, primarily by the Harriman family, they say for private use. It was purchased by the state in 1940. It is registered as an historic site, and is on the Appalachian Trail. Today it serves as one of the main routes to and from the Mid-Hudson Valley area.

The Town of Highlands  has played a great part in American history, and in 1982, when the community welcomed back the Iranian hostages; the Highland Falls area became rightly known as "Hometown U.S.A."

Compiled from the materials at the Highland Falls Library. 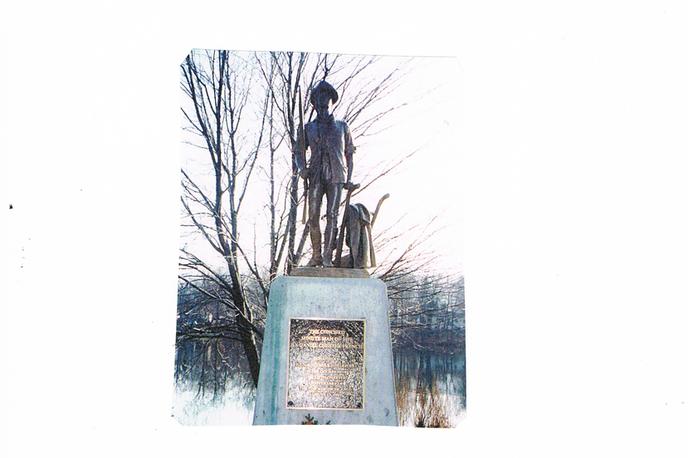