Fort Montgomery is a small hamlet located in the Town of Highlands. Population is 1418.

A rural area located on the Hudson River, areas are still mountainous and "country."  Many people journeyed here from New York and other areas to spend the summer. They stayed in tent communities and later built summer bungalows. Some of these families became permanent residents.

The area is noteworthy for the Revolutionary Battle which took place there in 1777... Click to see a map of the Highlands campaign Oct. 1777

We should all realize, especially our school children, that we are a nation of inventors. Energetic and thoughtful individuals are always coming up with new and better ideas on how to make our lives more productive and forward moving. One of the greatest inventions of all times was the new republic itself. Tired of being ruled by a King in another country, colonists created a new pattern for independence and the great American spirit was born. It reads like a fairy tale: Once upon a time in the 1700's, a new world was being formed. It started in England and reached across the ocean to the young American colonies. It went right up the Hudson River from New York and by 1777 landed right here in the Hudson Highlands.

The king considered the unruly Americans as wayward children who needed to be chastised. The British had a well-formed and trained military and were very confident of their views of success. However, so far, their strategy wasn't working. The wayward children were growing up and using those creative minds on their own.

All of these facts set the stage for the revolutionary events which occurred right at our own doorsteps, here in the Hudson Valley. The Hudson River has always been an important waterway. It was literally the gateway to the New England colonies. The British wanted to separate the colonies and break this growing spirit of independence. In order to protect this gateway and stop the British plans, several forts were built in the Highlands; Forts Constitution, Montgomery and Clinton.

The British planned what is referred to as a "three-prong" attack. Gen. Burgoyne was to advance down the Hudson, Barry St. Leger to come over through the Mohawk Valley and Gen. Howe up from New York. The first two generals proceeded as planned. Howe journeyed to Philadelphia, the seat of government and see what damage he could do there.

While all this was taking place, we were not idle. Gen. Washington placed Generals George and James Clinton in charge of the Forts Montgomery and Clinton and they prepared these areas for the battle that was sure to take place. A mighty chain was placed in the river near the Forts to attempt to stop the British ships from advancing. Two American frigates, the Congress and Montgomery, along with two row galleys and a sloop were all in readiness to protect the two Forts.

On October 5, 1777 yet another Clinton, on the British side, Sir Henry, sailed up the Hudson River towards Peekskill. Making an elaborate ruse to fool Gen. Putnam, they landed some troops at Verplanck's Point, about 6 miles below Peekskill. However, on October 6th, in the dense early morning fog, a large portion of the enemy crossed over to the west shore. Lt. Col. Mungo Campbell led the advance assisted by Beverly Robinson, an area resident who knew the mountainous terrain. A second division was led by Major Gen. John Vaughn. Campbell proceeded through the "Thunder Hill" pass to Doodletown. He was to continue on this route to attack Fort Montgomery from the rear. Vaughn proceeded to await the signal to attack Fort Clinton. The Americans had sent out a party of men to check on the enemies movements and they brought word back that the enemy was approaching. Gen. Clinton made preparations to resist by placing strategic cannon and men to stop the advance. He had hoped Gen. Putnam would send reinforcements but Putnam thought the British were attacking him and the supplies he held; therefore, he remained on the Peekskill side.

Slowly marched the near 3000 British to attack the Americans numbering only about 600, in both Forts.

The attack began with the British moving forward and the Americans defending. For three hours this courageous defense took place in spite of the overwhelming British forces. A steady bombardment from the British ships pounded the Fort and the American ships. What a scene of chaos taking place in Forts Montgomery and Clinton. Right in our own back yards!

At around 5 o'clock, Col. Campbell went with a flag of truce to Fort Montgomery. He was met by Lt. Col. William S. Livingston. Campbell requested the Fort be surrendered in five minutes to avoid further bloodshed. Livingston in turn said - rather  - if the British wished to surrender, they would be treated fairly. However, it was the Americans intent to continue to defend the Fort. Shortly after this conference, the British started a concentrated attack. Campbell, leading this assault on Fort Montgomery was immediately killed.

The British charge was overwhelming and final. The Americans resisted but were unable to defend every point of the large, under-manned and under-constructed Fort Montgomery. A similar attack took place at Fort Clinton, overwhelming the troops there. As dusk fell, the Americans that were left managed to struggle out of the "Twin Forts" and make their way over the mountain. Approximately 263 Americans were taken prisoner with 26 officers. Gen. George Clinton made it safely across the river and his brother, James also escaped after being wounded. The ships in the river had been set on fire to avoid capture by the British. As darkness overcame the Fort, the British Gen. Henry Clinton was assured of his success.

This very important battle, although lost by the most courageous Americans -  some of them local residents -  held the British troops from advancing up river to reinforce Gen. Burgoyne. This lack of reinforcements led to the eventual defeat of Burgoyne at Saratoga and the final end of the war. The battles of the Twin Forts, Montgomery and Clinton were essential in causing the defeat of the British plan in the Hudson Highlands. The Americans stood their ground, fought courageously and only left when ordered, to fight another day. We should all be extremely proud of the men who fought and died there for our American freedom this historic day of October 6, 1777.

Fort Montgomery was named for Gen. Richard Montgomery who died at the Battle of Quebec in 1775. Fort Clinton was named for Gen. James Clinton. Gen. George Clinton became the First Governor of New York and served for a total of 21 years. He was also the Fourth Vice-President of the United States. This patriotic spirit continues in a direct descendant of George Clinton, Barbara Brinkley who spearheaded the drive to re-name the Kingston-Rhinecliff Bridge. On May 4, 2000  at a heartwarming ceremony, the bridge was officially named the "George Clinton-Kingston-Rhinecliff Bridge."

For over 200 years the Fort Montgomery Battle Site has lain quiet and overgrown. No homage has been paid to the men who fought and died there. Each year on the anniversary of the battle, The Town of Highlands Historical Society would remind the public of the events that took place on October 6th, 1777 by sponsoring a tour and placing a tribute in the newspaper.

In 1997 The Fort Montgomery Battle Site Association was chartered by New York State to further a plan to preserve and promote this historic site. Archaeological studies were  carried out in the 1970's by the Palisades Interstate Park Commission, uncovering numerous artifacts currently being inventoried by the State Office of Historic Preservation.  Governor Pataki  showed his great concern for this Historic Site by allocating funds to carry on the work of restoration. In 2001 he  presided at a preliminary ribbon-cutting ceremony, opening up the trails around the Fort. In 2002, the 225th anniversary of the battle the Governor presided at the Grand Opening of the site to the Public.

and New York State Office of Parks, on October 5 of 2019, the Fort Montgomery Battle Site Association will  commemorate the 242nd Anniversary of the 1777 Revolutionary Battle. There will be day-long events from 10 a.m. to 4 p.m.  with several artisans showing their craftsmanship. In addition there will be several troops in attendance showing camp life and doing mock drills. It is a great day for children and adults!
In addition to all this great planned activity, the site Museum and Media room will be open as well as the bookstore full of great items. Members receive discounts.  Entrance and parking is free of charge !The Site also offers monthly lectures and reservations are required. Contact the numbers below.
For further information contact Stella Bailey, FMBSA Executive Director At 845-446-0400 or site manager, Grant Miller at 845-446-2134. write to FMBSA, Box 376, Fort Montgomery, NY 10922 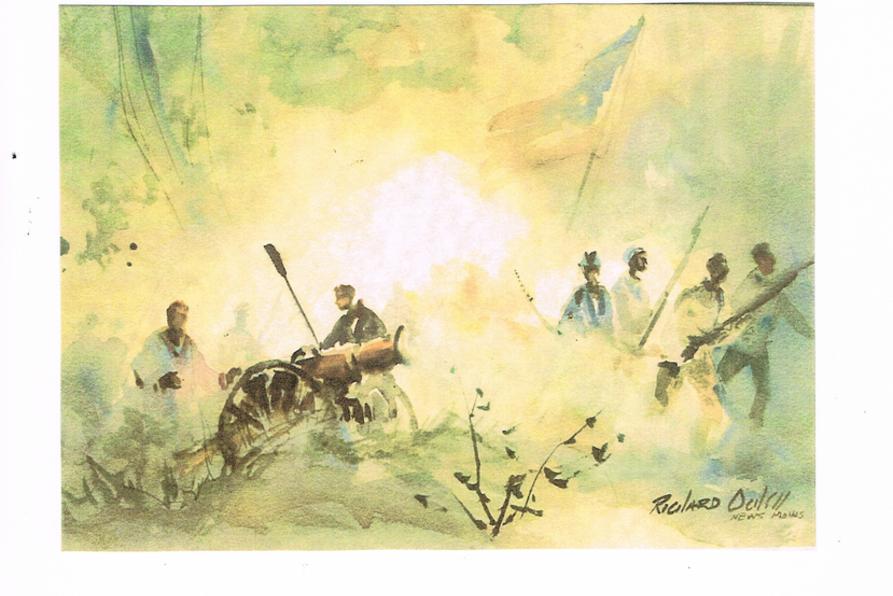