Located partially in the Town of Highlands, this beautiful park is situated along the shores of the Heritage Hudson River, just five miles south of Highland Falls and West Point.

In 1908 There was a plan in place by the New York State Prison Commission to erect a prison on the site of the present Bear Mountain Inn. Construction and clearing had already begun when Mrs. Mary W. Harriman met with park officials concerning donation of some land for a public park. In 1909 she dedicated approximately 10,000 acres in Rockland and Orange Counties along with $1,000,000. but...with the agreement that the commission forget the prison idea. It was agreed and development of the Park began in 1910. In 1915 the Bear Mountain Inn was opened. There were many changes to the interior decoration over the years, but lately steps are being taken to restore it to its original rustic look. .

The Trailside Museum was opened in 1927 and stresses, to young and old alike, the importance of protecting the ecology. There are several displays here that tell the story of some very important historical events in this Great Hudson Valley area.

The Appalachian Trail runs thru the park along with many other great hiker's trails. Information is available at the Administration Building.

The Perkins Memorial Tower, named after past Park Commission President, George Perkins, sits atop the 1306 ft. summit of Bear Mountain. The view from this tower takes in four states and the Great Hudson River Valley clear to New York City. On April 29th, a new Merry-Go-Round was presented to the public by Anne Perkins Cabot and George W. Perkins in memory of their parents. This is a most beautiful and entertaining addition to the park which offers some type of recreation for everyone and provides a great days outing to visitors of the Town of Highlands area.

The Bear Mountain Bridge in all its majesty stretches across the mighty Hudson. The Bridge celebrated its 75th Year in 1999. The Bridge was privately built with funding from the E. H. Harriman family. When it was built it was the longest suspension bridge in the world. Opened to traffic on November 27, 1924, the West Point ,40 - piece band led a parade of 400 automobiles across, filled with State and County officials. Mrs. Harriman, carrying red roses, unveiled a bronze tablet which can still be seen today. It was suggested by then Governor Benjamin B. O'Dell that the bridge be named the Harriman Memorial Bridge, but, as of this date, it has not happened. The bridge was sold to New York State in 1940. 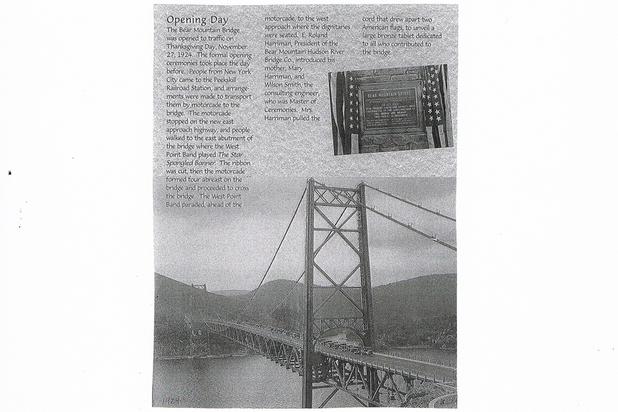